The late, watery afternoon sun was slipping to the west when we arrived at Riverside Cemetery.  The oldest operating cemetery in Denver, Riverside takes up a massive seventy-seven acres between Brighton Boulevard and the South Platte River.

Created in 1876 as an alternative to the quickly deteriorating City Cemetery – now Cheesman Park, more on that location another time – Riverside was a cemetery of choice for wealthy Denverites who wanted a beautiful, park-like, secluded burial place.  It was so popular, many exhumed and moved their already dead and buried to Riverside! While the addition of the BNSF railroad track in 1890 dissuaded a few families and the dying-off of the grounds due to a loss of water rights turned away others, Riverside was still the burial location for over 67,000 people including over 1,200 Civil War veterans.  It was designated a National Historic District in 1994.

Although I have not found documentation of any ghostly encounters at the cemetery, given the breadth of time and historical events represented within its gates, it would seem unlikely not to have a spirit or two lingering around!

We started in the north section at the Old Stone House.  Made of limestone, the Stone House was used as an office and holding tomb, and possibly also a chapel. Is the sloping concrete ramp where the bodies were moved in and out? 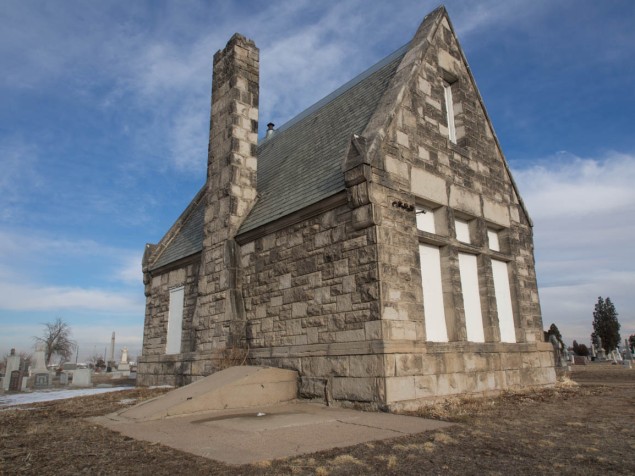 Walking through the winter-brown landscape we were struck by the disquieting juxtaposition of time suspended and time having moved on: modern smokestacks and industrial complexes surround the neighborhood around memorials that go back nearly 140 years. 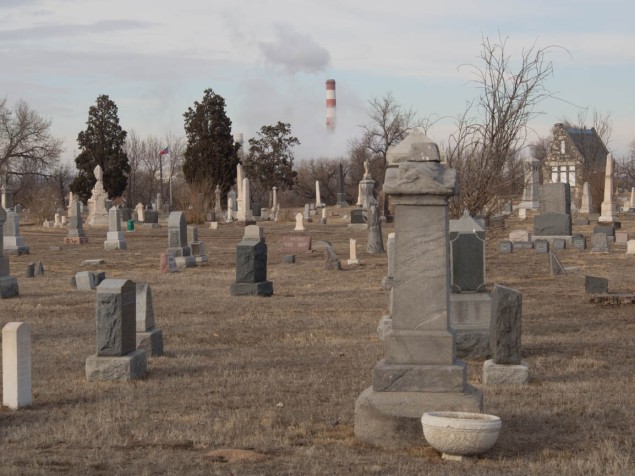 Moving west, we explored the area around three crypts that are buried into the slope of a slight hill.  These are justifiably creepy, even in hazy daylight.  The first crypt looks like it has been entered before – there is a large, rusty-looking metal plate holding the two wooden doors together.  Barely.  There is a lot of disturbing flex in those doors.

According to Annette Stott, author of Pioneer Cemeteries: Sculpture Gardens of the Old West, the first red sandstone crypt belonged to Hartsville Jones, a saloon keeper and liquor salesman.  But the mausoleum apparently stands empty.  Jones might have lost its title because by the time he passed, he had squandered all his money and was working as a janitor. His third wife, Mary is buried behind the vault.  Hartsville himself is buried in an unmarked area somewhere on plot with Mary & the mausoleum.

The second crypt you can actually see down into: very disconcerting. The interior is filled with dirt and debris.  This is the 1889 Martha T. Evans mausoleum which, according to the Adams County  Archives,  supposedly holds eight family members. In reality, it is wide open and  – hopefuly – empty. 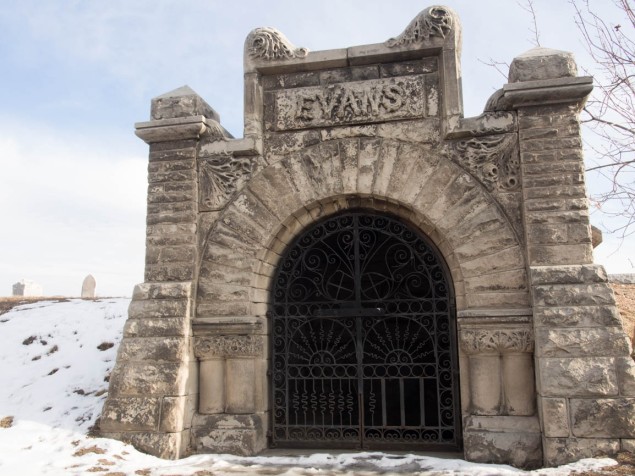 The third crypt is in the best shape.  Built in 1982 it belongs to Ovando J. Hollister, the former publisher Daily Mining Journal. This one is sealed up tightly and well-maintained.

Everything was quiet as we moved among the graves. The silence at Riverside is heavy, as if the weight of so many stories buried beneath your feet is pressing one down. There was nothing to hear but the occasional scolding of a magpie, who seemed to resent us in its territory, and the rustling of leftover dry leaves stirred by a chilly breeze. We quickly fell into a thoughtful, somber mood.

We walked back up near the Old Stone House to look at two famous animal monuments: the magnificent Addison Baker horse and a life-sized white marble dog sitting sentinel on the grave of a once thirteen-year old boy, Frank Shy.  Both of these are striking and poignant.  And, they later became a bit controversial. 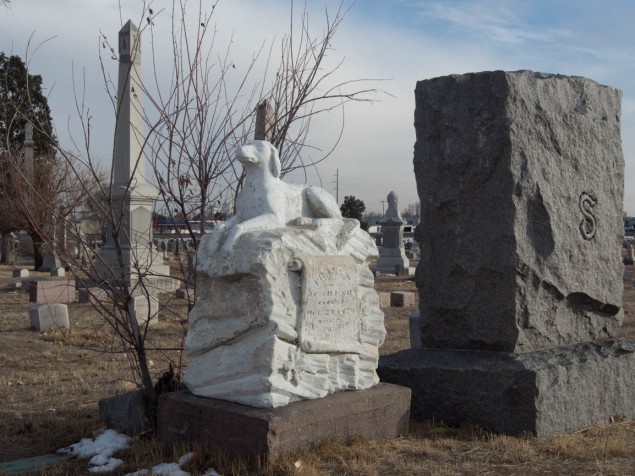 The Baker horse was erected in honor of Addison Elton Baker, a farmer and real estate agent investor who supplied the first fresh water to Denver: bringing it in barrels from a spring on his property.  The horse himself is “Frank” and was placed there by Baker’s daughter because Baker “loved horses more than his own blood kin.” USGenWeb Archive Project – Colorado,  Denver Public Library Digital Collections .

These and other animal monuments inadvertently became players in an epic popularity battle between Riverside Cemetery and the newer, posher Fairmount Cemetery that opened across town in 1890.

Fairmount Cemetery, located in what is now the Windsor neighborhood, entered into direct competition with Riverside. In a bid to lure customers from Riverside, Fairmount forbid the use of animal sculptures as monuments, implying they were lower class, or vulgar. Instead, Fairmount decreed that only angelic and allegorical figures were appropriate. (Pioneer Cemeteries) Fairmount also only allowed marble, bronze, and granite only monuments, while Riverside allowed sandstone, limestone, iron and zinc (known as white bronze).  Riverside actually has the largest number of zinc monuments in North America.

Notably, Riverside did not discriminate: if you had money for a plot you could be buried wherever you liked in the cemetery.  It did not designate sections based on religion, nationality, or race.  Fairmount did. Riverside eventually lost the popularity battle, however, and consolidated with Fairmount.

After looking in awe at the beautiful Baker monument, we began a search for the graves of three famous individuals: Kiku Oyama, Silas Soule, and Augusta Tabor.

We started looking for Kiku’s resting place first.   Kiku Oyama was a twenty-something Japanese emigrant, unfortunately famous for being the third victim of the Market Street serial killer.  In the fall of 1894, Denver’s red light district was shaken by three eerily similar murders.  According to Jan MacKell author of  Brothels, Bordellos, and Bad Girls, the theory was that the killer either knew the girls or was a client, since all three were found strangled with a towel stuffed in their mouth and no sign of forced entry into their rooms.   Newspapers named Market Street “Strangler’s Row” and compared the crimes to those of Jack the Ripper which had occurred in London only a few years earlier in 1888.  Lena Tapper and Marie Contassot, the first and second victims respectively, are also interred in Riverside. (Find a Grave)

Findagrave.com listed Kiku’s resting place in section 25 which covers a lot of ground. Although we wandered for a while, we had no luck finding her grave.   We found so many others with fascinating monuments or touching memorials, including this small, ambiguous stone: who is Pete?

The next individual grave we went searching for was that of cavalry Captain Silas Soule.  Soule was a an abolitionist, best known for refusing to support US Army Colonel John Chivington during the Sand Creek Massacre. During that “battle” defenseless Cheyenne and Arapahoe people – primarily women and children – were brutally killed and mutilated. Soule and his men refused to fire on the helpless encampment and Soule later gave testimony against Chivington.  He was assassinated less than six months later – presumably by friends of Chivington.  One suspect in his murder was caught but escaped and was never recaptured. (National Park Service: The Life of Silas Soule)

We found Soule’s grave easily in section 27, a section filled with veterans of many conflicts.  His headstone shows that his integrity and humanity are not forgotten today: a gold angel, a coin, and simple, carefully-placed stones decorate the top, and a flag and winter bouquet of artificial flowers grace the base of the stone.

Our last search was for the monument of Augusta Tabor, wife of Horace Tabor.  Augusta Tabor grew up in Maine with something of a pampered lifestyle that she quickly had to leave behind when she married Horace. They traveled west, eventually to Leadville, with Augusta taking in boarders and working as a laundress and storekeeper.  In 1878 they made a fortune investing in the silver rush, and this ultimately helped bring about their divorce.  Augusta wanted to save money, Horace loved to spend and he became embarrassed by her flagrant frugality which was out of keeping with the upper-class style he wanted to display (she kept a cow tethered to the front door of the mansion Horace bought them in Denver and milked it herself!).  Eventually, Horace moved into the Windsor Hotel and married Baby Doe McCourt.  Augusta used her money wisely: she turned the mansion into a boarding house.  She saved money and donated much of it to charities. She funded a Unitarian church, and supported the Pioneer Ladies’ Aid Society.  She died wealthy.  Horace lost his money. (BabyDoe.org, FindaGrave.com) 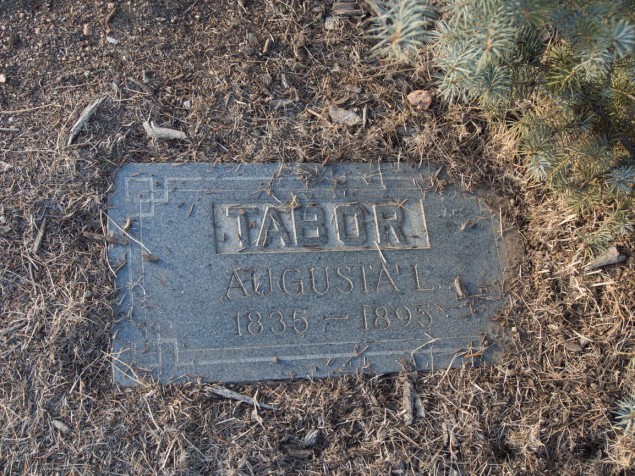 Augusta has two grave markers at Riverside.  The first is a simple stone set into the ground.  Interestingly, it lists the wrong birth date.  The second monument, erected by the Colorado chapter Daughters of the American Revolution in 1995, lists the correct birthdate.  While the simple stone is probably more suited to Augusta’s plain and straightforward style in life, the larger monument honors her courage and generosity.  A pink flower decorates this grave, and stones are placed on top, as they are on Soule’s.

By now, the sun was starting to disappear over the mountains and the cold was getting sharper.  A BNSF train rumbled by a stone’s throw away from the graves, shattering the stillness.

Although we could have spent much longer at Riverside, it was time to go.  We made our way around iced-over puddles and patches of mud back to the car.  We had found no ghosts or spirits, but discovered a quiet haven of “silence and slow time.”   And, although everything around us was winter brown, the stories of those interred below wove a tapestry of colors in our imagination.

“This is a Cemetery…Lives are commemorated – deaths are recorded – families are reunited – memories are made tangible – and love is undisguised. This is a cemetery…”  Fairmount Heritage Foundation brochure.

I have a long history in libraries! I put myself through school working in public libraries in Boulder and Austin. I got my second Master's to become a "real" librarian and worked in public, private and most recently school libraries in Carson City, Boulder and Denver. I have a passion for books and writing, and clearly, the paranormal. I love to read, bake, bike, kickbox, watch scary movies, play video games, and play with my dogs!

One thought on “Strangeography: Riverside Cemetery”