Unless it is Frozen Dead Guy Days.  When 15,000 cheerful and slightly morbid visitors from all over the globe arrive to celebrate “Ned’s” famous and quite literally frozen dead guy, Grandpa Bredo Morstoel. 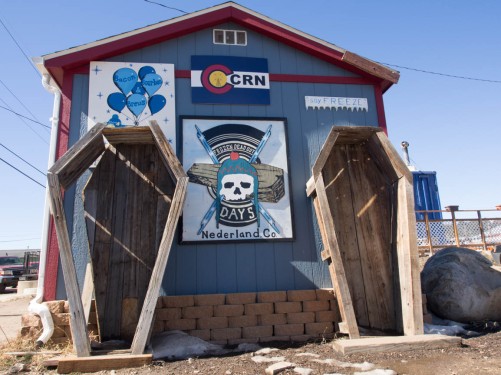 Voted by the New York Times as one of the 10 Best Parties in Winter – a “Cryonics first Mardi Gras”- Frozen Dead Guy Days commemorates Grandpa Bredo who died in 1989 and is preserved in dry ice in a Tuff shed somewhere in the Nederland hills.

You read that correctly.

Grandpa Bredo died of heart disease in Norway.  His daughter, Aud, and grandson, Trygve believed deeply in the future of cryonics and dragged their deceased relative to California and placed him in the Trans Times cryonics facility from 1990-1993.  After that, they moved him to a shed behind their home in Nederland.

This became problematic for a number of reasons.  Trygve was deported for Visa issues.   Aud, living in her house with no electricity and no plumbing, was evicted.  Panicked that Grandpa Bredo would thaw out, she let the local news know that she was harboring a dead relative in her storage shed.

Hearses getting ready for the parade

The city of Nederland rapidly passed an ordinance (Chapter 7, Article 2, section 7.34.) regarding the “Keeping of bodies.”  The law prohibited keeping “the whole or any part of the person, body or carcass of a human being or animal or other biological species which is not alive” on one’s property.  However, as the much-cited joke goes, Grandpa Bredo was – wait for it – grandfathered in. 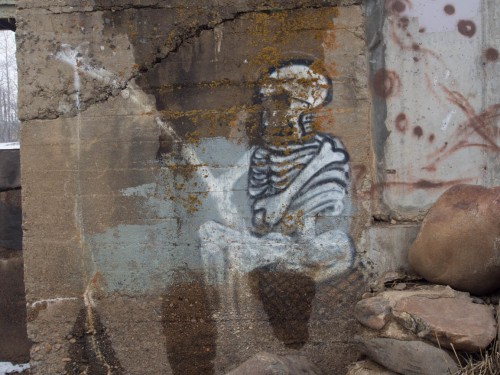 Things got weirder.  Trygve  tapped local planetary ecologist, Bo “Iceman” Shaffer to keep Grandpa frozen.  Trygve supplied money from overseas for Shaffer to make a run down the mountain once a month and pick up 1,600-1,800 pounds of dry ice.   Shaffer would truck it to the Tuff shed (Tuff now a proud sponsor of FDGD!) and pack it around Grandpa’s metal coffin in his homemade plywood and Styrofoam freezer box. He would also check the temperature inside, to make sure it was cold enough.    After eighteen years (!) of caring for Grandpa, Shaffer and Trygve had a falling out.  As Shaffer put it on his website: “overseas management and local labor couldn’t agree on terms” and he gave up the job in 2012.

There was talk of moving Grandpa back to Norway, but he remains (Remains! Ha! Sorry…) in his shed above Ned, and one Brad Wickham is the current iceman.

We drove to Nederland the back way to avoid traffic in Boulder Canyon.  The Peak-to-Peak Highway was deserted and we rode past snow-frosted pine trees through an eerie mountain fog that had us thinking of The Lion the Witch and the Wardrobe (my husband) or alien abductions and missing time (me). 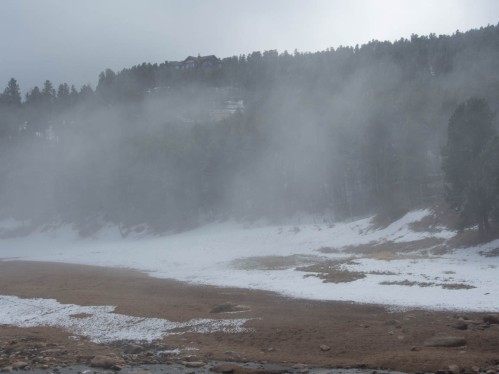 “The fog rolled in…”

We scored parking at the lovely Nederland Community Center – busy hosting a pancake breakfast – and walked down a short trail into the foggy town: perfect ambiance for a dead guy party.  And yes, there was Oingo Boingo being played over a loudspeaker in the street at one point. 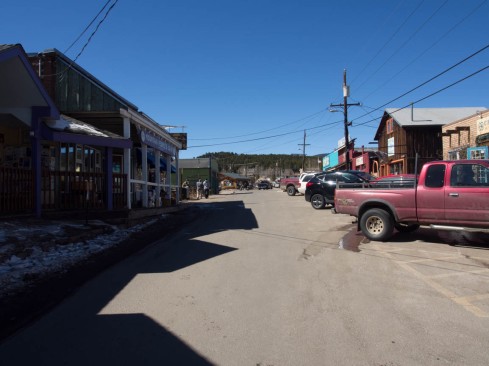 We purchased wristbands to allowed us into the three festival tents: the Bacon, Bourbon & Brews tent, the Re-Animate tent boasting a cryogenically created “Bredo’s Brew” by a local Longmont brewery, and the Brain Freeze tent.

Ice pig sculpture in the Bacon, Bourbon & Brews tent.  A token got you a plate of bacon!

Then we went to check out the hearses getting ready for the parade.  The owner of the Phantasm hearse actually took time out from his preparations to show us a photo of his son with Angus Scrimm (the Tall Man) from the films.  I geeked out.  If you haven’t seen the Phantasm movies – at least the first three – you’re missing some classic horror.  Watch them!

We caught street performer Sam Mallory – great standup comic, o.k. fire-juggler – and then found a spot to watch the parade.  The crowd was massive, but everybody was in great spirits.  (Spirits!!  Ha!  Right.  I’ll stop.)

A dead Shriner (?!) kicked off the parade, followed by the hearses and the coffin racing teams. 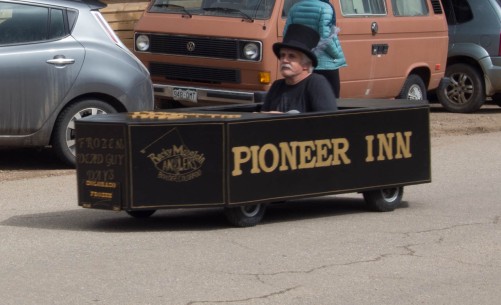 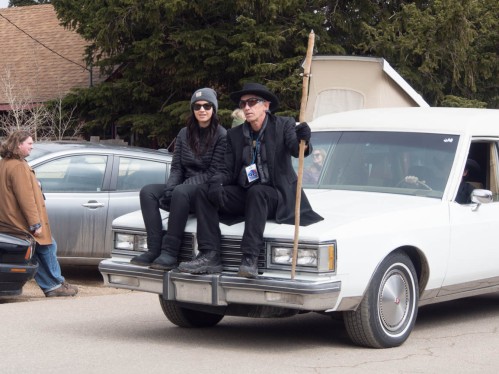 Co-founder of FDGD on right.

Beautiful matte finish on this hearse.  Love the red treatment on the windows! 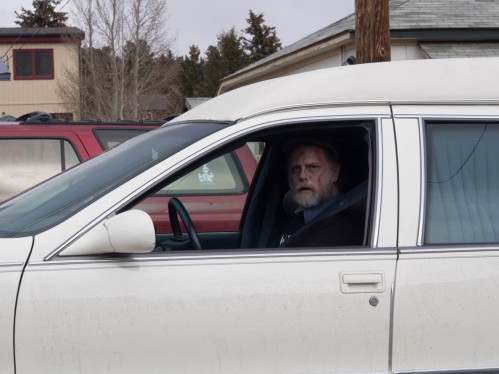 Trash bag costumes – appropriate for what will come.

We had Super Heady Tacos with Patrick Swayze and lots of other folks outside the 3B tent, then went off to see the coffin races.

I’m not sure why, really.

We secured a nice spot close to the muddy, snowy, frozen course that we had watched the city surveyors create with backhoe just a couple of hours earlier.  They had to truck snow in from Eldora to help make the course as there wasn’t enough in Nederland.  The city Mayor, Kristopher Larsen, was in great spirits presiding over his first coffin races in office.

Two coffin teams raced at a time.  The winner would go on to compete against the other winners of each heat.  Teams had to carry their coffin – with a living body in it – up the slushy  hill, around a tight corner over to a short pole.  Their coffin member would leap out, spin themsleves around the pole five times to get nice and dizzy, and then balance across a log where their team would pick them up.  They would race through the giant frozen puddle/water hazard to the finish line. 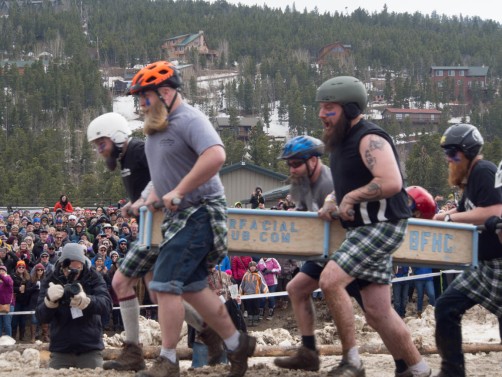 They won their heat!

The Lady Lawyers: a  poor footwear choice slowed them to a walk.  Note: high heels are never a good choice in deep frozen slush. 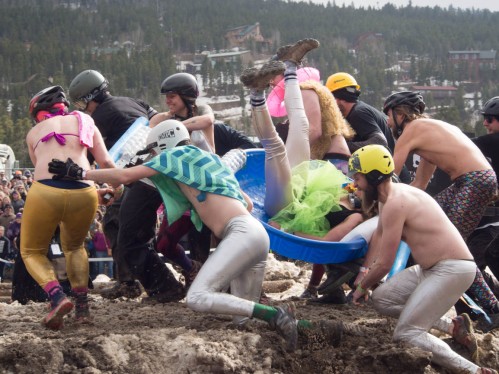 Good, morbid fun for all ages!

Sadly, we didn’t manage to get a tour up to Grandpa’s actual Tuff Shed – available first-come, first-serve leaving from the Carousel of Happiness –  but there’s always next year.  We also missed the polar plunge, frozen t-shirt contest, and icy turkey bowling; but we were exhausted. We had been outside for five hours in 35 degree fog. Yet, as we drove home we were also oddly contented.  We’d seen a hearse parade, coffin racers, listened to two great bands (The Whiskey Charmers & Banshee Tree) and basically had a second Halloween in March.  Bizarre.  Awesome.  I can’t wait to go again next year. 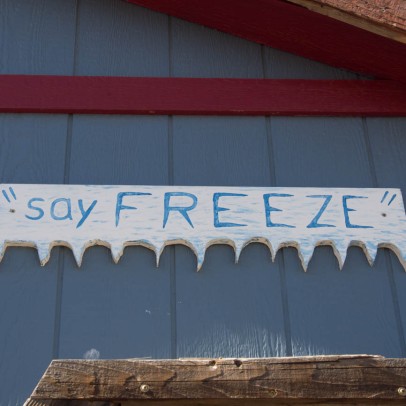 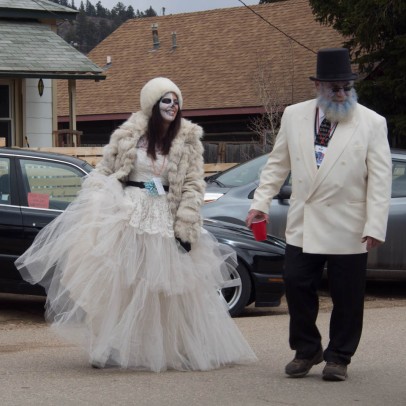 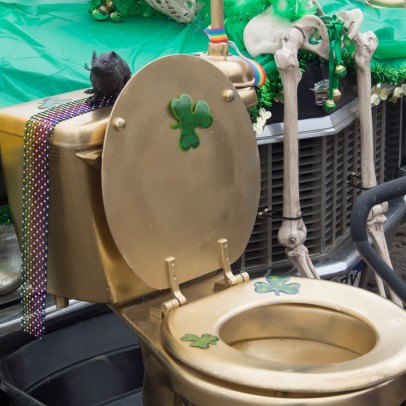 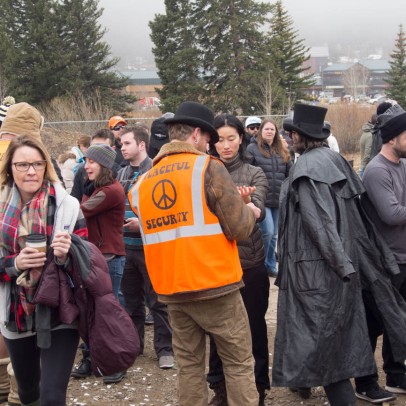 “How One Colorado Town Honors a Corpse It Keeps on Ice”

I love libraries! I worked in the Boulder and Austin library systems while I earned my second Master's to become a "real" librarian. From then on I worked in public, private, and most recently school libraries in Carson City, Boulder, and Denver. I have a passion for books, writing, and clearly, the paranormal. I love to read, bake, bike, kickbox, watch scary movies, kill zombies (mostly in video games), and play with my dogs!